Ride in Tours Actualités March 24 2016
The 31st edition of the motorcycle flea market was taking place this week-end in Niort in the Poitou region. The event has become, for many years, a great classic motorcycle rallye in the calendar of ...
Read more

Ride in Tours France May 23 2020
I’ve been travelling on motorcycles ever since I got my licence 15 years ago at the age of 17. I started by riding all over the UK, but pretty soon that felt too small and so I headed to France… On my...
Read more

Ride in Tours Actualités December 30 2017
All travelers intending a long term motorcycle trip in Europe have several options from renting, shipping or buying a bike. All those solutions have advantages and disadvantages that need to be analyz...
Read more
31st Edition of the Motorcycle flea market of Niort
Bikes available for sell & buyback
Mad Nomad motorcycle adventure RTW : The kindness of strangers
What makes Ride in Tours's motorcycle tours so special ?
A ride in D-Day Normandy
Riding in Italy, a certain art of living
Have you ever thought about riding in the Canary islands ?
A great motorcycle ride in the french Alps : the Vercors
Visit of the Museum of the 24 Hours of Le Mans
Ride in Tours, a motorcycle tour operator apart ?
A ride in Western Provence
Frequently asked questions about our tours
Ride the mythic Nürburgring in Germany !
Crossing the Pyrénées on motorcycle
Regional motorcycle tours in France
Buying a motorcycle in Europe, and sell it at the end of the trip.. South of Grenoble, along the Isere river, here lies two of the most beautiful motorcycle riding regions of France : Vercors and south Grésivaudan. Here, nature, history and traditions mix with the spectacular road graven in the cliff or at the bottom of deep gorges. A motorbike destination not to be missed for any riders intending a motorcycle trip in the french Alps. 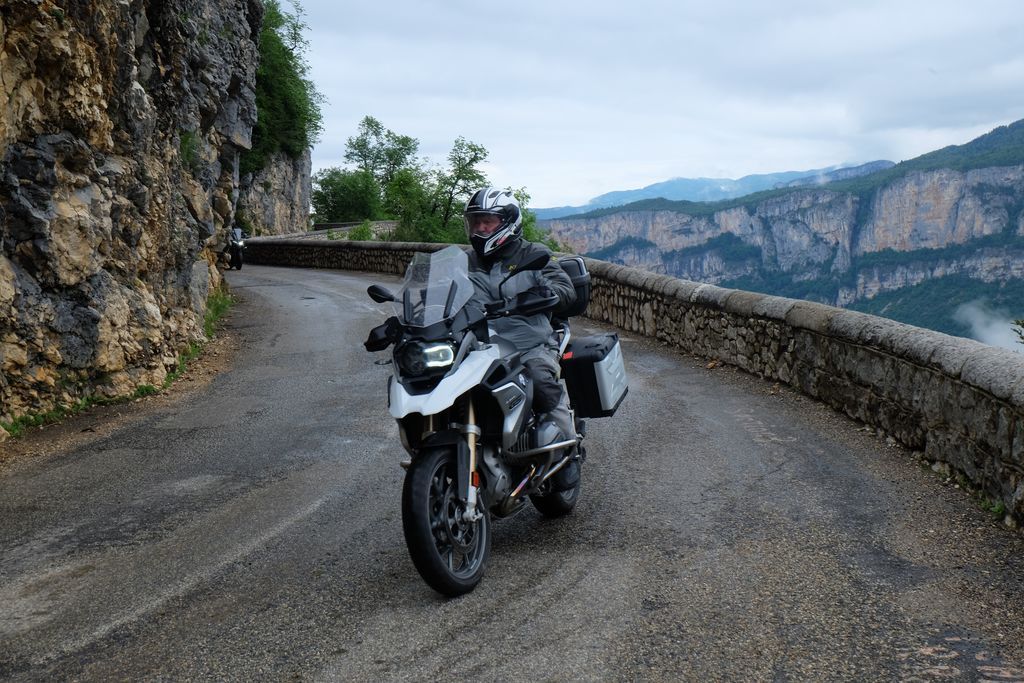 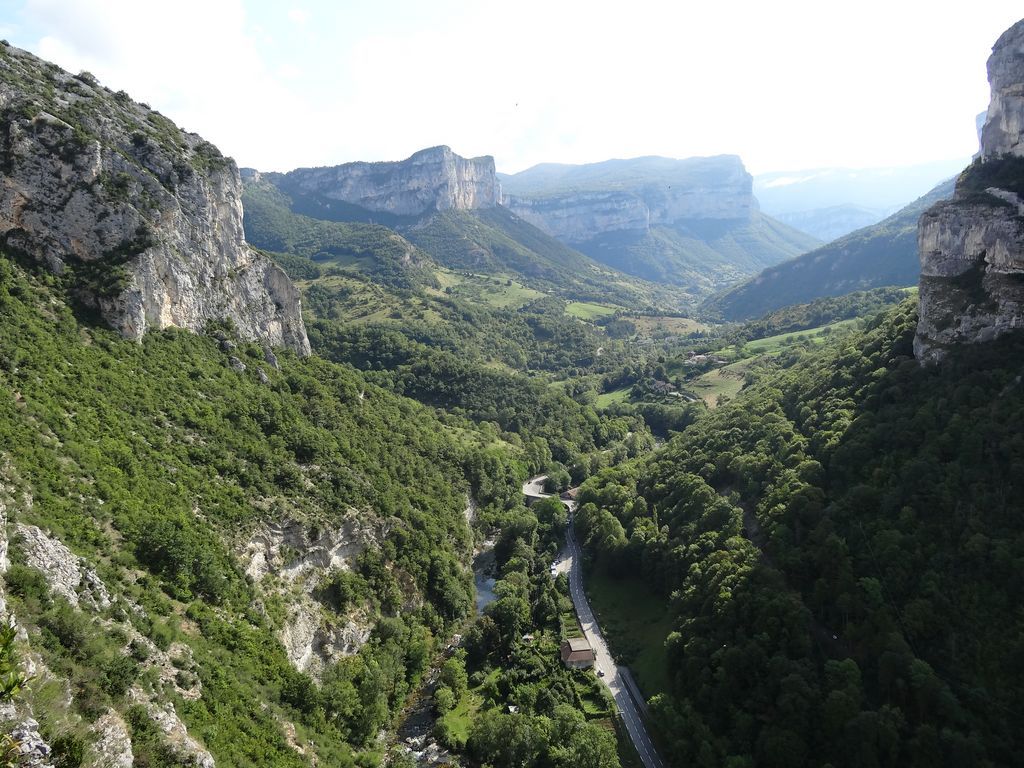 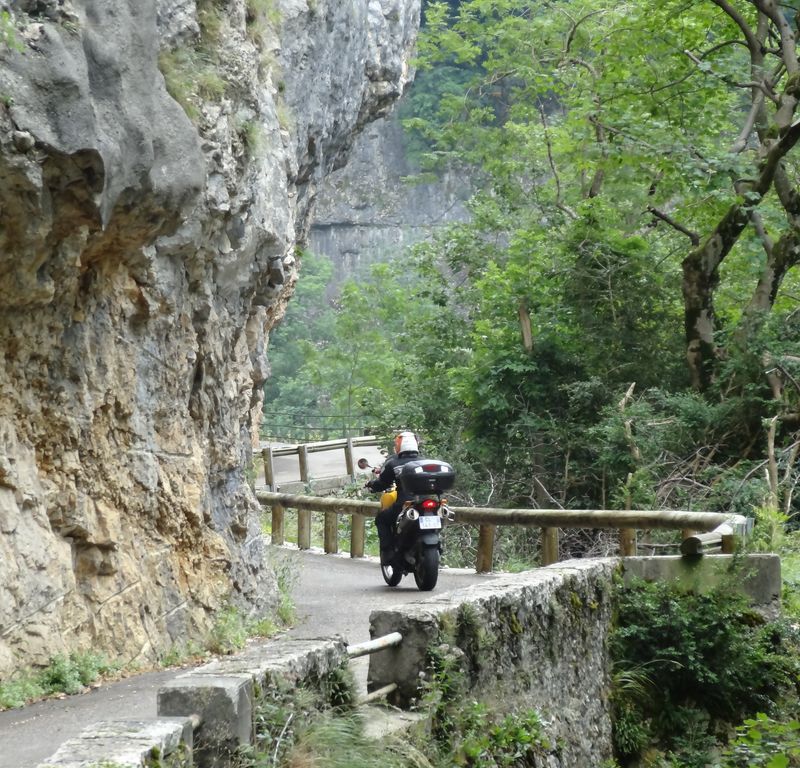 Listed ad Natural Park regional since 1970, the Vercors mountain is an immense plateau interspersed with gorges and cliffs. Its an area of 459 600 acres and there are 72 villages inhabited by only 37 000 people. The high plateau, with its 14800 acres of forest, is the largest natural reserve in France. Located at the foot of the mountains, South Grésivaudan is in essentially an agricultural region that has always played a key role between the Vercors and the rich Rhône Valley. Since the last century, for example, virtually every roads built and carved along cliffs or steep gorges, where the waters off the plateau is pouring, were used to convey the forest woods from the plateau to the Isère river valley. The region offers exceptional sites such as the circus of Choranche, the village of Pont en Royans or Saint-Antoine l'Abbaye. In addition to the various sightseeings of interest such as the castle of Sône or its beautiful villages dating from the Middle Ages, south Grésivaudan has very beautiful roads, often in the middle of nut crops, the specialty of places. Linking visit of Vercors to the discovery of South Grésivaudan equal one of the most beautiful riding destinations that can be made with any type of motorcycle.

The small village of Choranche is a very good starting point to discover both regions with your bike. For two reasons : its excellent location which offers a magnificent view on the cliffs of Presles and also because Georges, the owner of the hotel restaurant of the village, will not hesitate a moment to leave his kitchen to ride with you with his motorcycle. The itinerary that we suggest begins with the visit of the caves, few miles away from the village, towards the plateau. The site is a series of underground rooms connected by two rivers that feeds a cave lake that lies in a large room surrounded by huge transparent stalactites and stalagmites. Inside, the temperature is 10 ° C , all year round. Outside, you can walk along a balcony path that offers a great view on the circus and the gorges. These cliffs are one of the high places for climbing and base-jumping  in France. 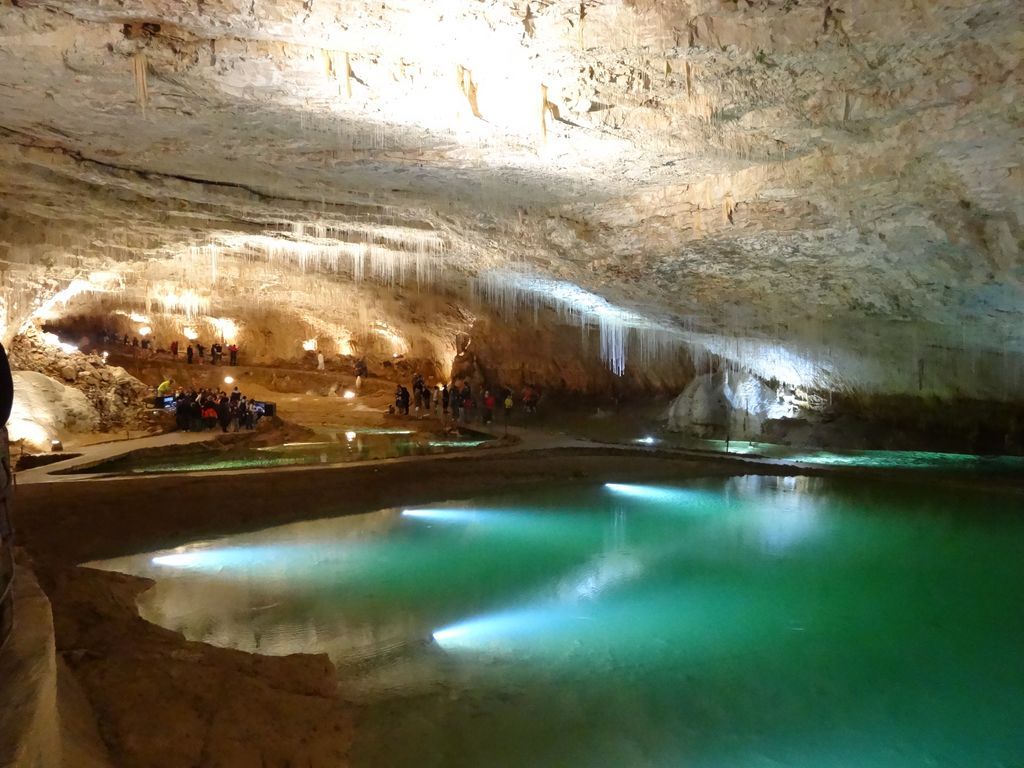 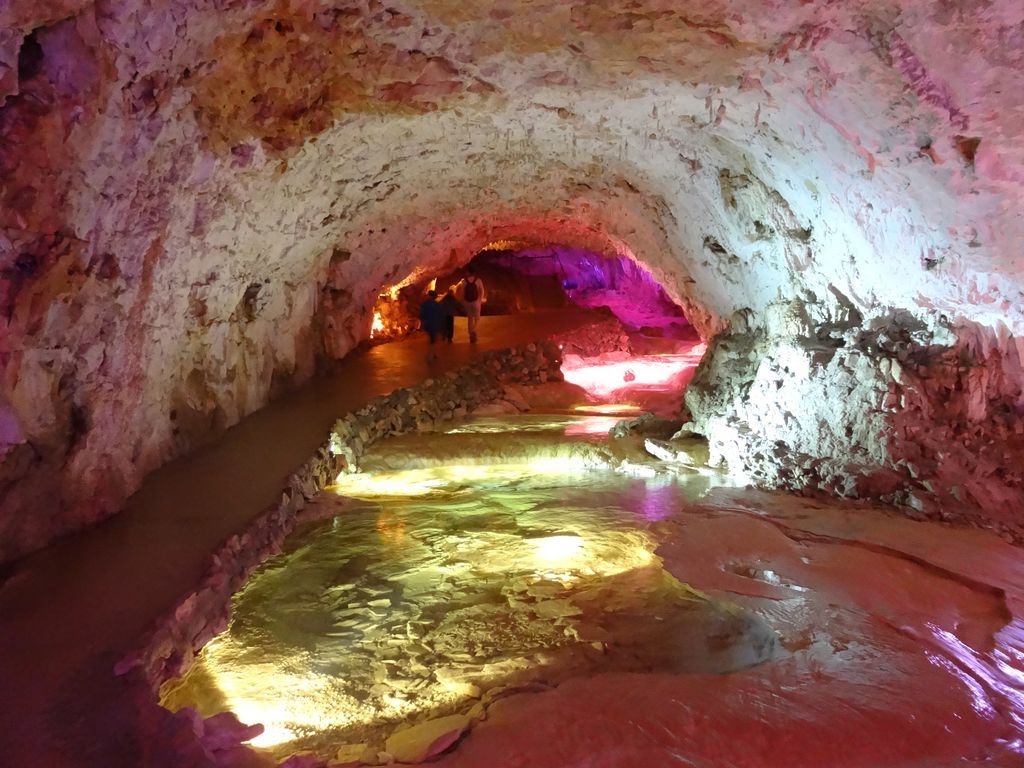 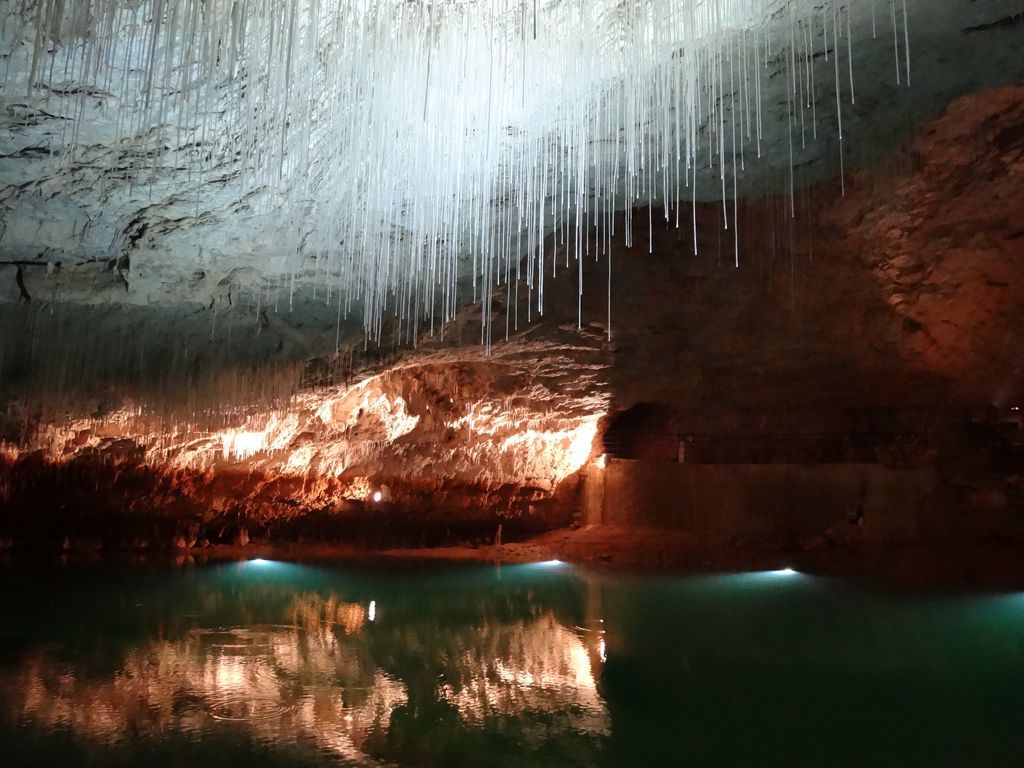 Following the D531 countryside road, towards Villars de Lans , you’ll cross the Bourne river gorge. Here, we can already get an idea of ​​what the local mountain roads are like. Narrow, winding, with the cliff edge on the left and the river on the right, the average hardly exceeds 30 km/ h. When your bike reach the plateau, at more than 3280 ft elevation, the view on the almost rectilinear peaks who demarcate the great central valley is striking. From Lans en Vercors to the north and the Rousset pass to the south, villages are connected by a major countryside road from where a multitude of secondary small roads departs towards many passes. It's finally quite simple not to get lost on the plateau. The possibilities of riding are numerous and riding your motorcycle with no goal, randomly inspired by the moment, will often be the opportunity to make beautiful discoveries and great encounters. 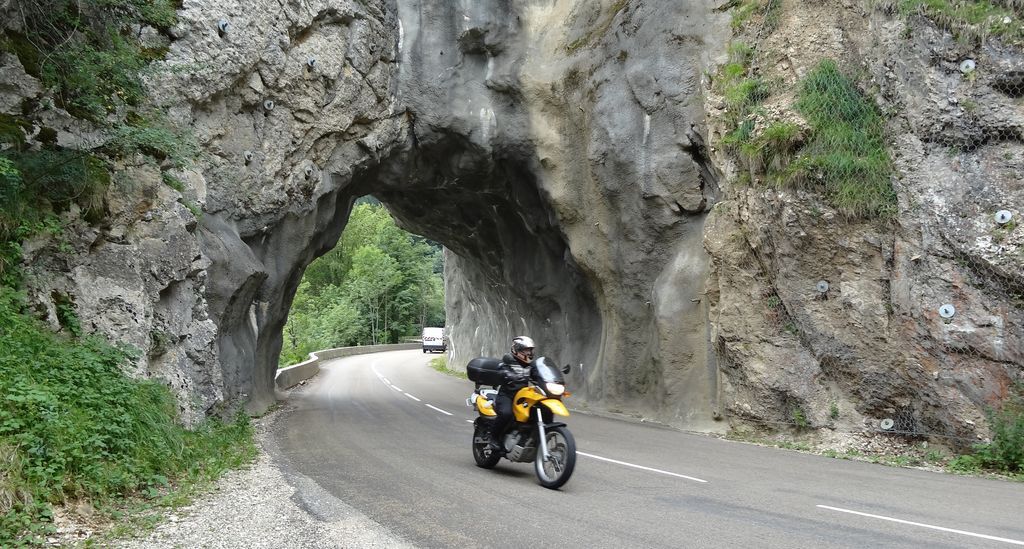 Among the most beautiful viewpoints, is the plateau of Molière which goes up to the valley of Autrans (overlook point on Grenoble) and the Rousset pass which offers a spectacular view on the switchbacks and curves that go down to the small Provencal town of Die. Let’sgo down the plateau by the winding road D76, from Vassieux  en Vercors to the Machine pass, to reach then Saint-Jean en Royans. This road is certainly one of the most impressive in Europe. A stop is necessary to embrace the landscape and to think about  the people who carved the rock to build these roads to get the wood down in the valley. The road perched along the cliff, sometimes above of 650 ft of drop, is not wide (about 3 or 4 meters), and is lined with many small tunnels. If by any chance the clouds stay down in the valley, the show is unique !.  From Saint Jean, our bikes carry on this road until Pont in Royans, the village mark the limits between the Vercors and the south Grésivaudan. 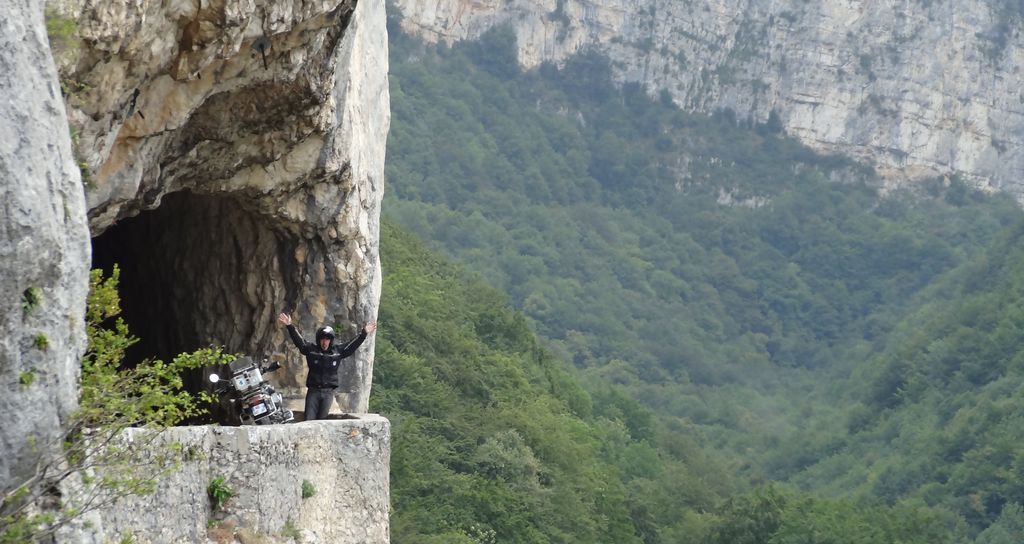 In the nineteenth century a bridge was built on the river to allow the mules to pass with their loads of wood. Since then, the village has grown around this passage and the houses are overhanging over the Bourne River. Very impressive. 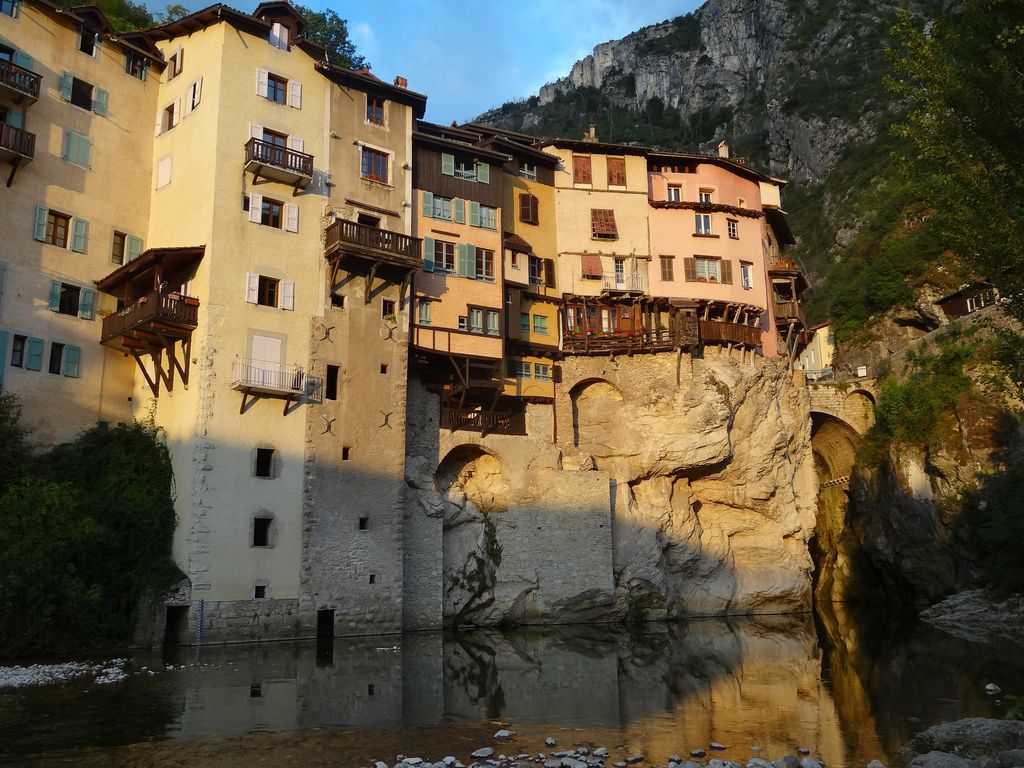 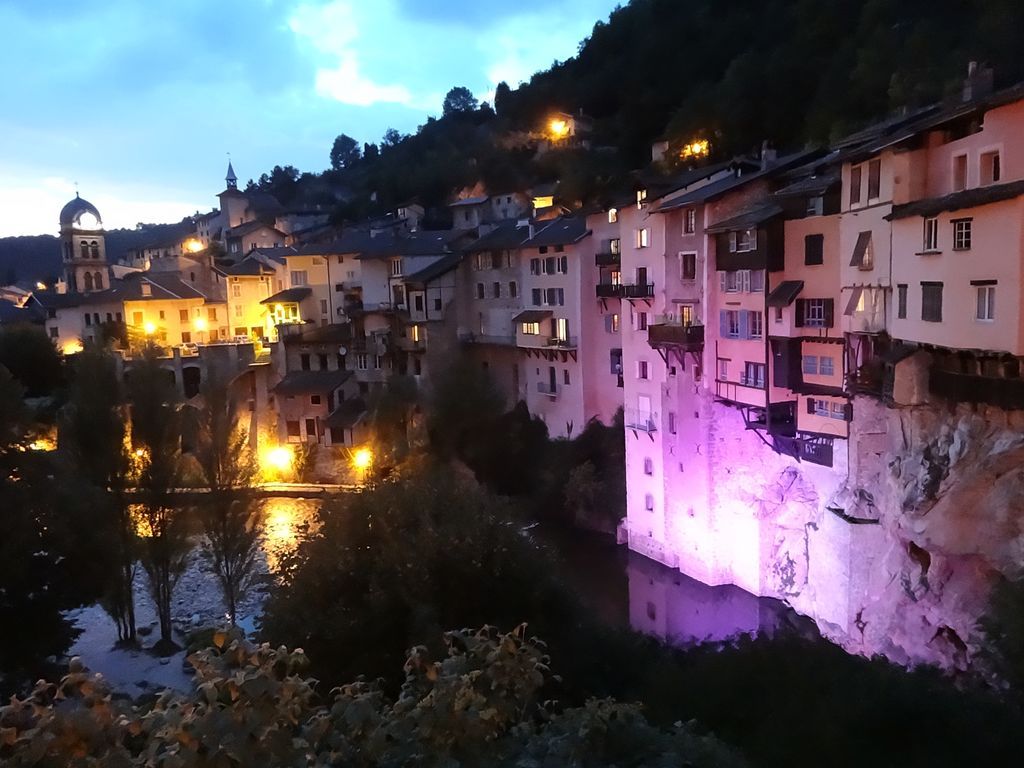 Interesting to visit is the Museum of Water, which, besides aware the visitor on this essential resource, makes perfectly understand its role in the geological evolution of the limestone moutain. 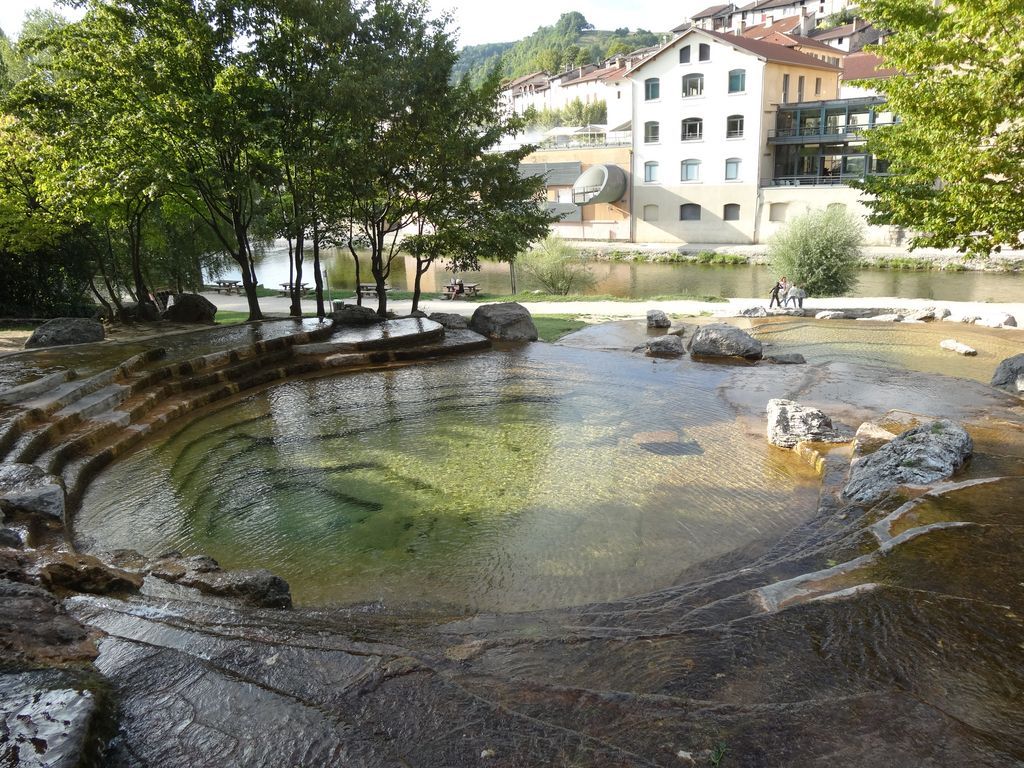 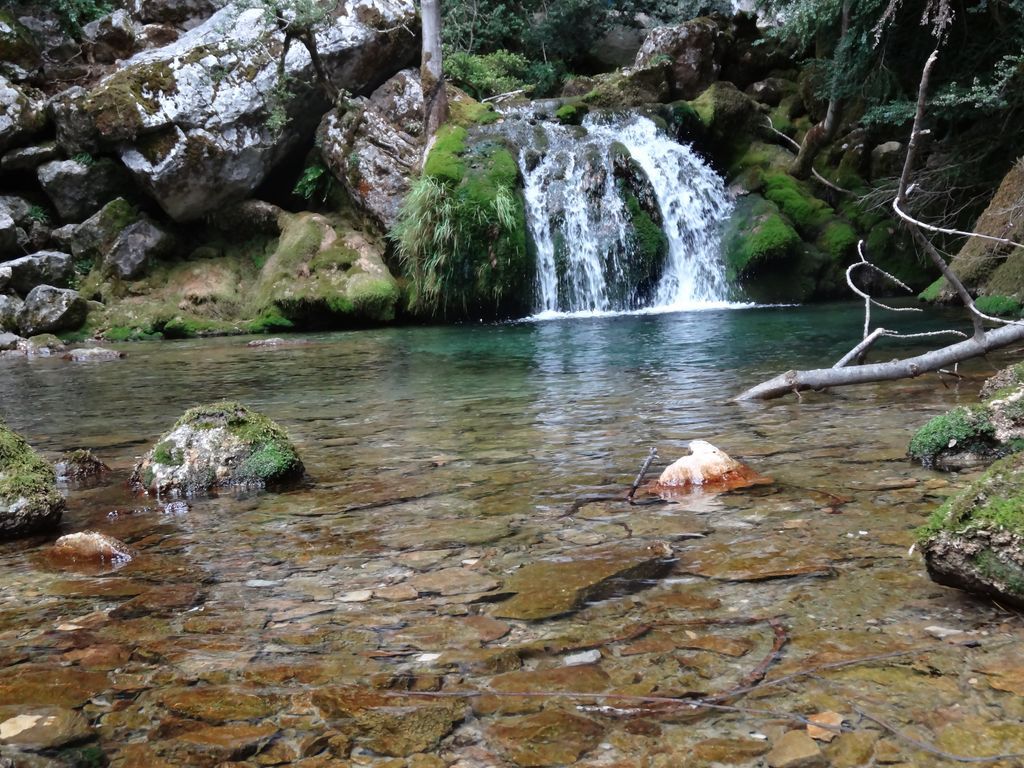 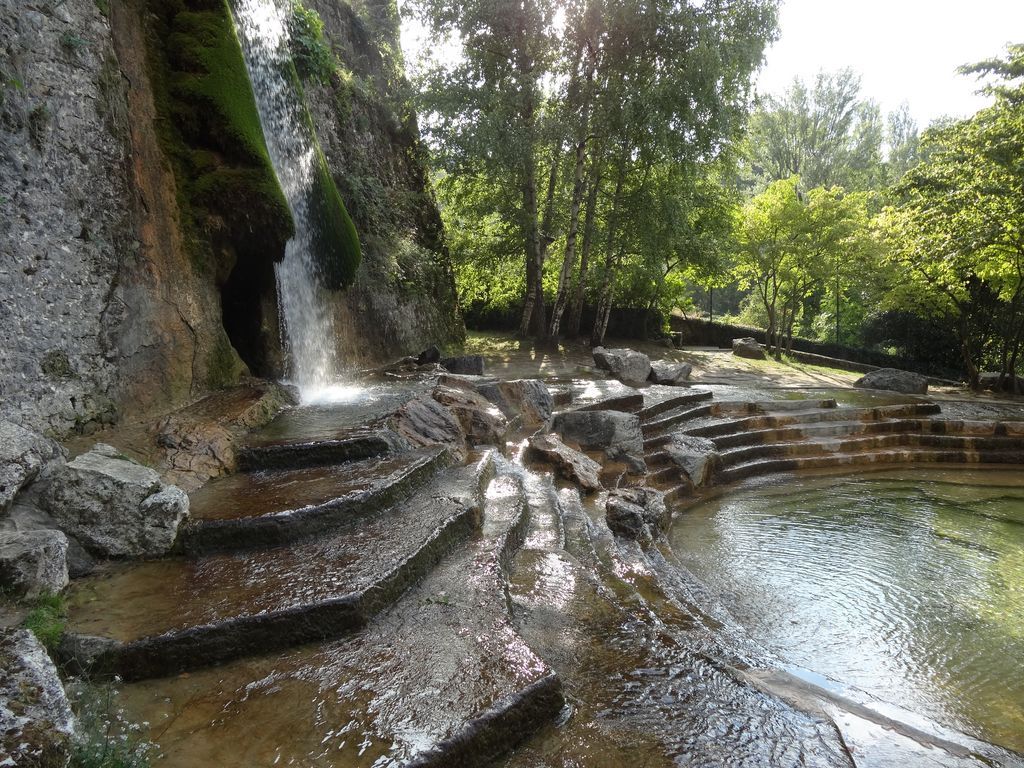 About this, a little further, along Isère river, don’t miss the castle of La Sône. This magnificent building is worth the detour and deserved a good guided visit. Next lies the magnificent (and the word is weak) garden of petrifying Fountains. It is a true mineral and vegetable paradise due to the presence of a strange rock (tufa) which is formed only with the calcification of the water coming out of the rocks. The microclimate that reigns in these places, thanks also to the presence of the river, allows to cultivate more than 18000 species of plants, mostly from Méditerranée to the most exotic. Even if you are not fond of botany, the visit is simply fascinating.

To clean up the engine of your motorcycle after this mountain ride, the pretty road that connects the village of La Chatte to Saint Antoine l’Abbaye  is strongly recommended. Very beautiful, with a layout that marries the relief and turns that wind between nut crops, the D27 is a dream! Just like the village of Saint-Antoine which dates from the Middle Ages and has seen many travelers. The church was erected in the 12th century to house the relics of the holy man. This village, its cathedral and the surrounding area are registered in the register of national historic monuments since 1840... We’re not surprised ! 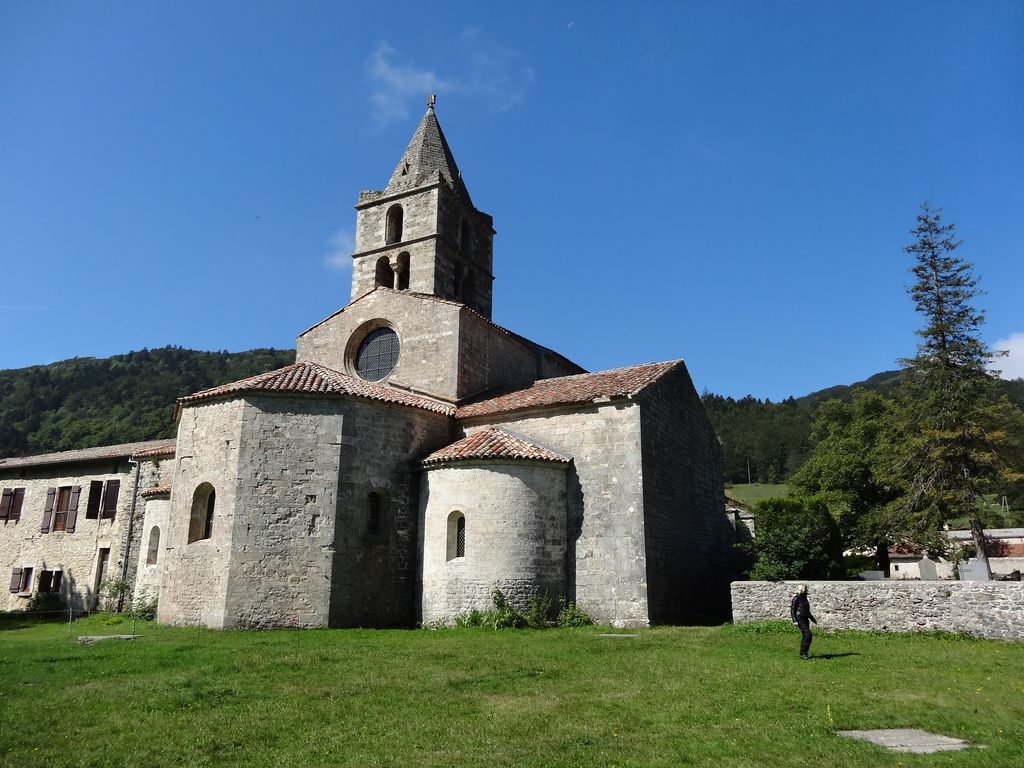 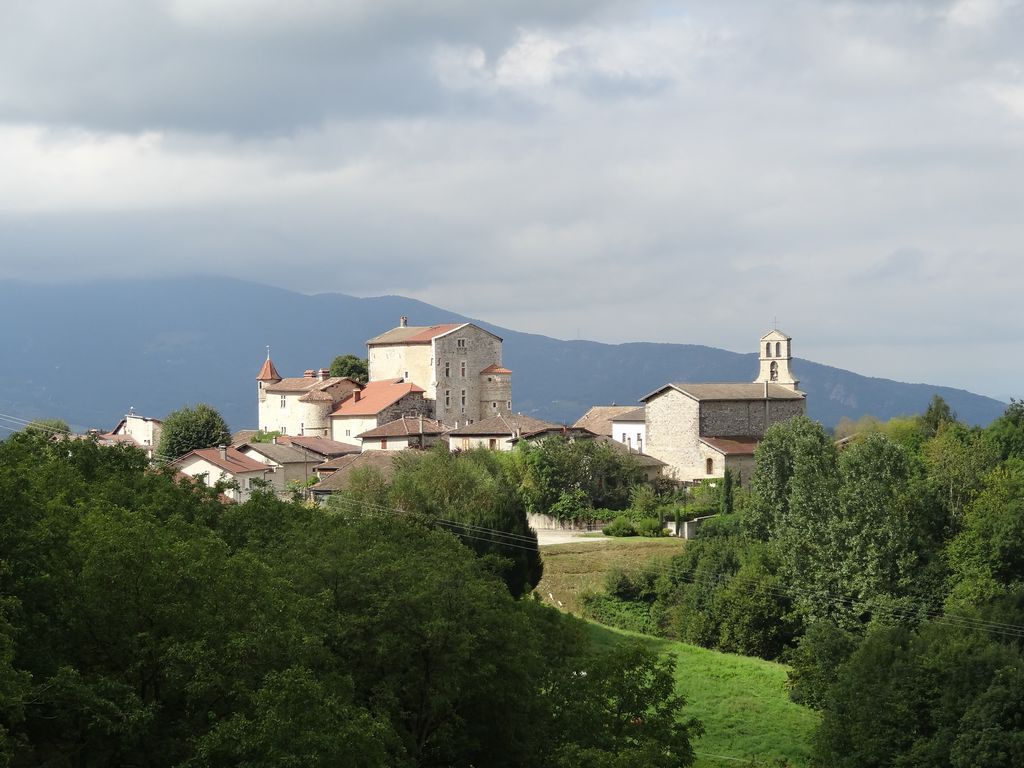 You may discover this beautiful region in our guided Tour de France motorcycle tour as we spend 2 days of ride in the Vercors region.