Jan 06 Posted by Ride in Tours in Moto

Pyrénées, the most authentic mountain ranges of France, from the Atlantic to the Mediterranean, it's 500 km as the crow flies. Riding it with your motorcycle count at least double, while roads turns as much as you can wish!. 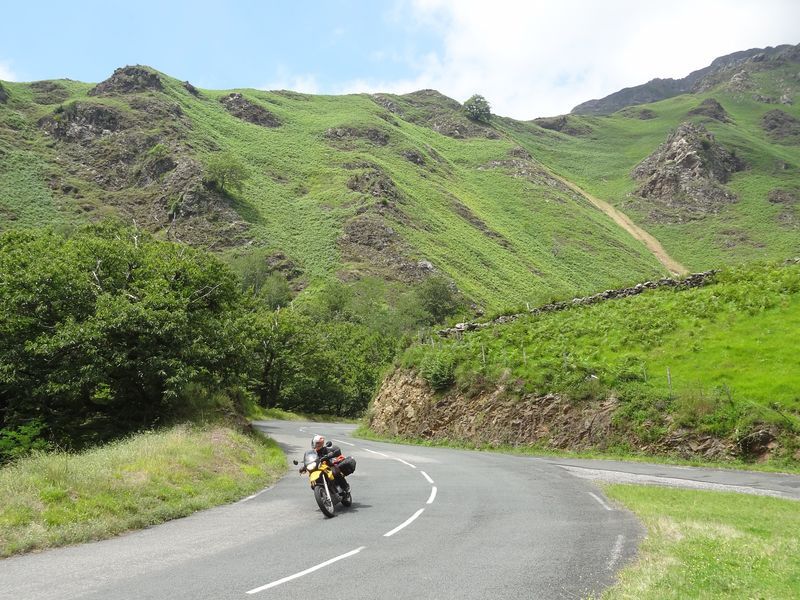 The departure is given on the Basque coast, in Saint Jean de Luz, on Jar Alai day, the sardine festival. The BMW 1200 GS harnessed like a trading post horse, is ready to roam 1200 km of road eastbound towards the Mediterranean. When one plunge in Basque County and moves away from the sea, the traffic weakens and the Basque soul is revealed. Our first step is short, we stop in Ainhoa, who has the label of "most beautiful villages in France". 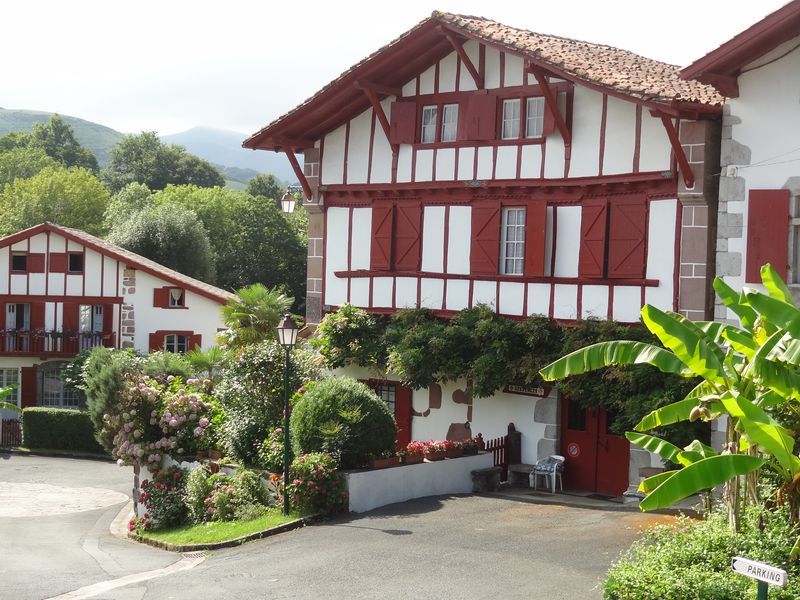 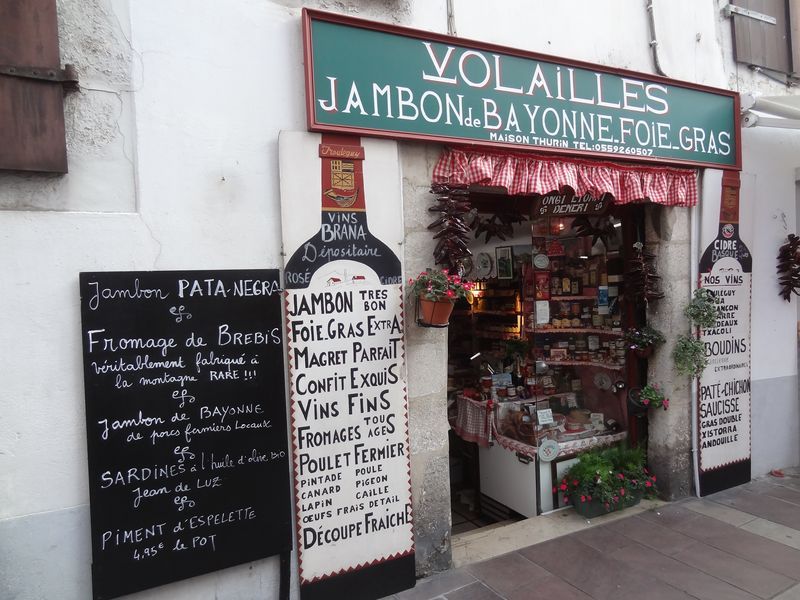 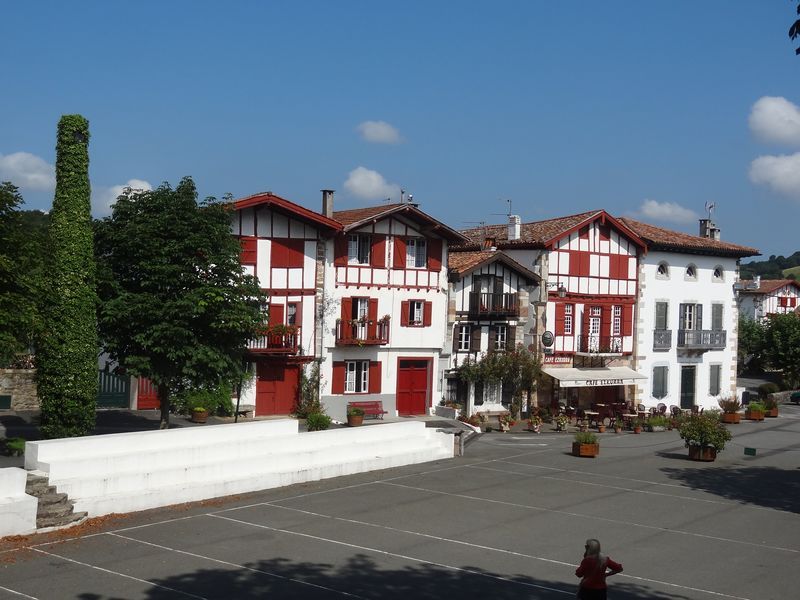 In the middle of the white houses with green or red facings, we find the famous walls of Basque pelota where the chistera will soon be handled by pelotaris. Indeed, on the 15th of August, the celebrations are in full swing from the Landes region and the feria of Dax and extends to small communities lost to the hinterland of the Rhune where everywhere you’ll find competing Basque pelota or force play competitions .

Crossing  Espelette is a must do, the capital of pimento  where the white walls of houses are blushing with the red put to dry in the sun along their cords. 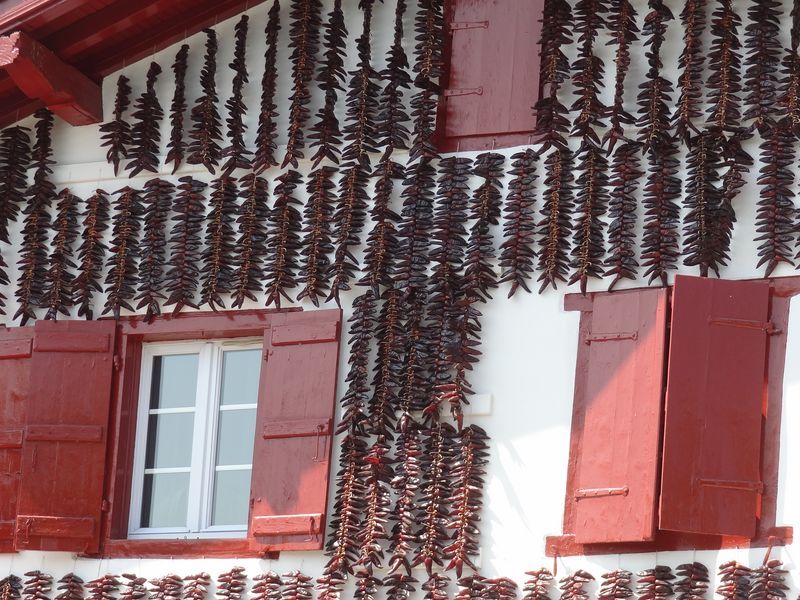 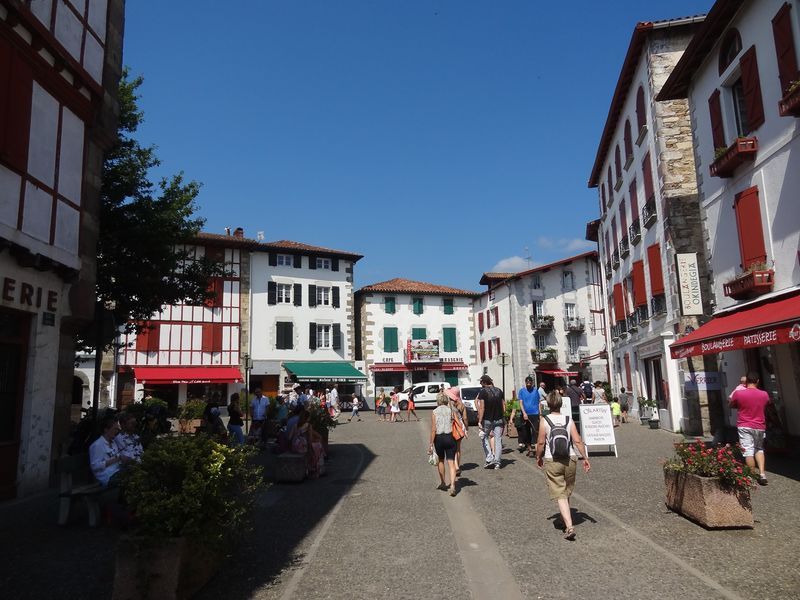 In Cambo les Bains, we start to go up a river (we will follow watercourses during this journey), the Nive river, to Saint Jean Pied de Port. But it's a few kilometers further, that we have really discovered the Basque beauty. We are on the D918 which leads to Mauleon Licharre through a the pass of Osquich covers with this succession of grassed nipples hills at the summit of which sometimes a lonely tree stands tortured by the wind. 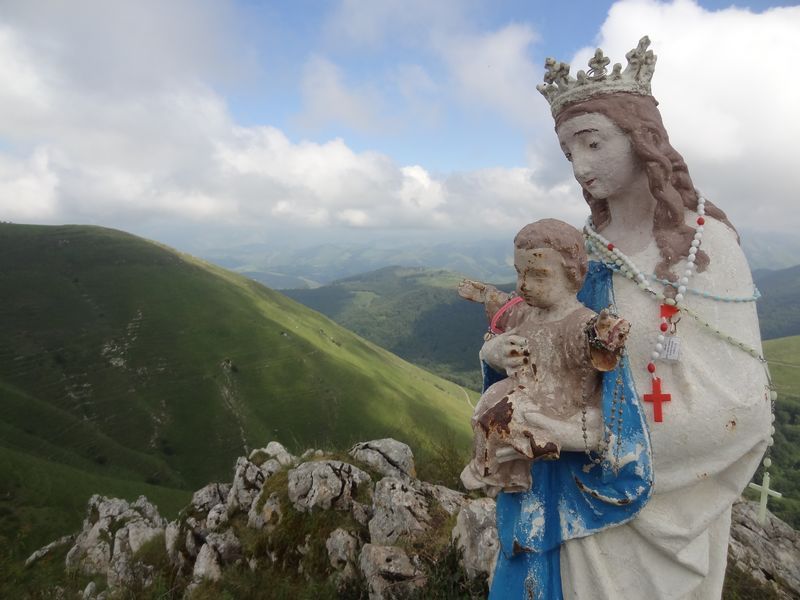 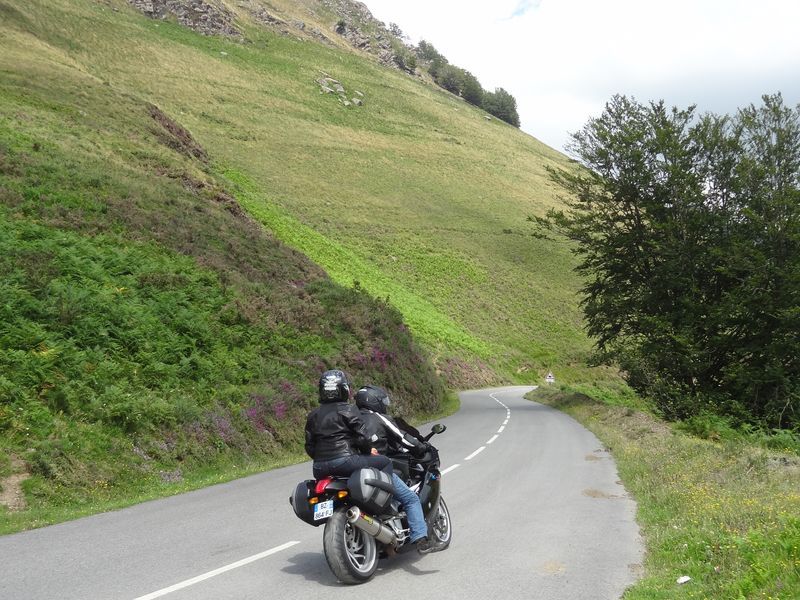 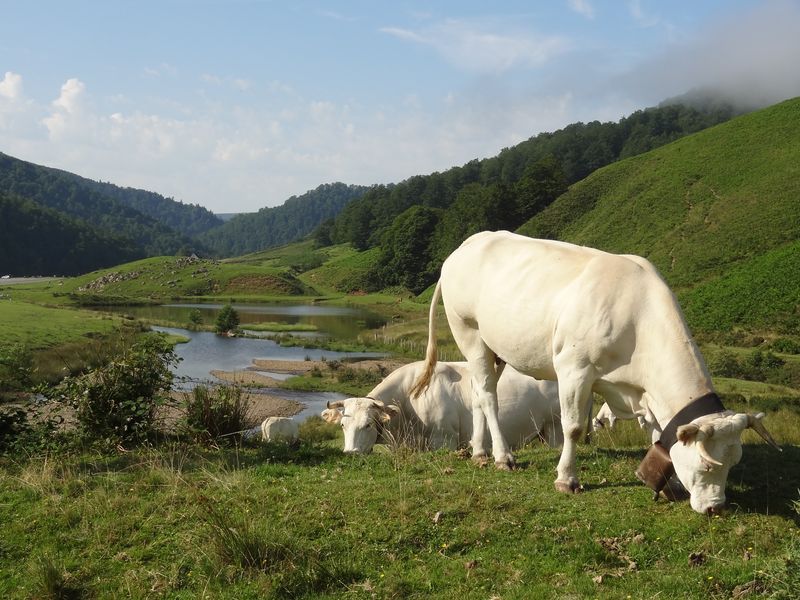 A sky Cloud-laden gives by its shades of gray, the replica to the subtle variations of green hills. Hard to leave the two overlook points that follow each other if a slightly chilly wind did not push you to hit the road again. By small countryside roads we reach then the valley of Ossau and Laruns our next step. The opportunities to cross into Spain are numerous  because roads go up more often in valleys in the north-south axis than they run from west to east. Cigarettes, gas and cheaper spirits also attract the bikers. Valley of Aspe, Valley of Ossau, along the rivers we go back to the homeland of Picasso in a blow of gas. At the Somport pass, fans of industrial wasteland can find a impressive scenery: the giant old train station of Canfranc where transited all cross-border convoys. 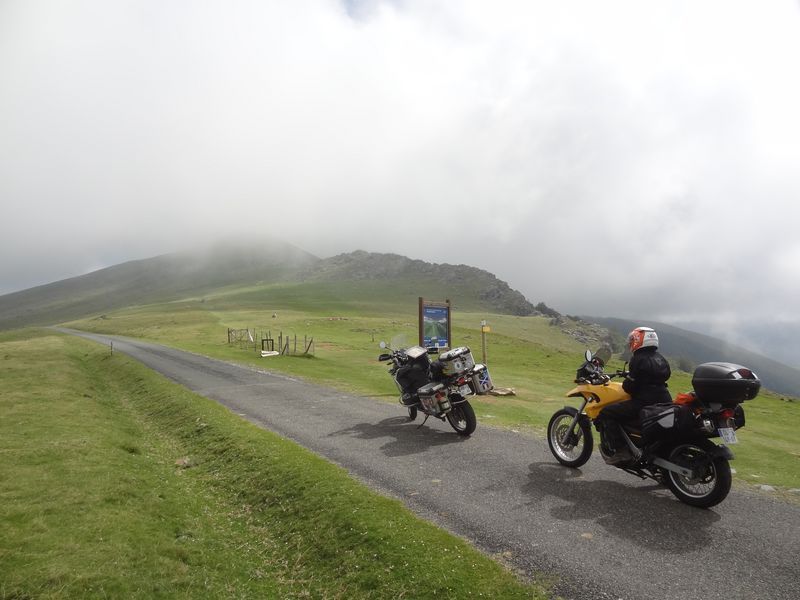 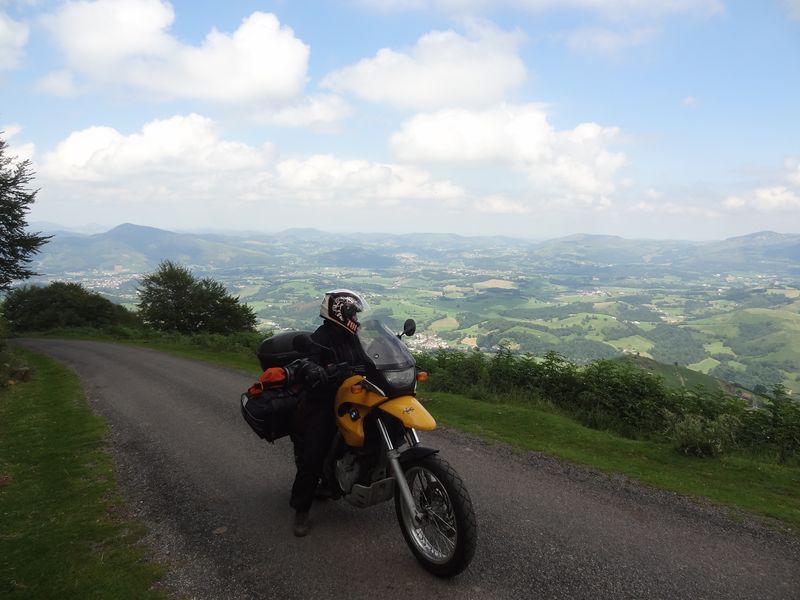 Pic du midi of Bigorre, we follow our pendulum which says "more to the east". We arrive in the heart of the High Pyrénées and after the Aubisque pass, we started the mythical ascent of the Tour de France, the uncategorized pass of Tourmalet. In the middle of dozens of  multicolored cyclists,  we play the chasing motorcycle of the Tour de France. The scenery becomes more and more desert as one climbs the narrow road framed on the left by the peak of Bigorre and on the right by the Néouvielle moutain. Once at the top we are lucky as weather is nice for the souvenir picture under the Tourmalet roadsign. 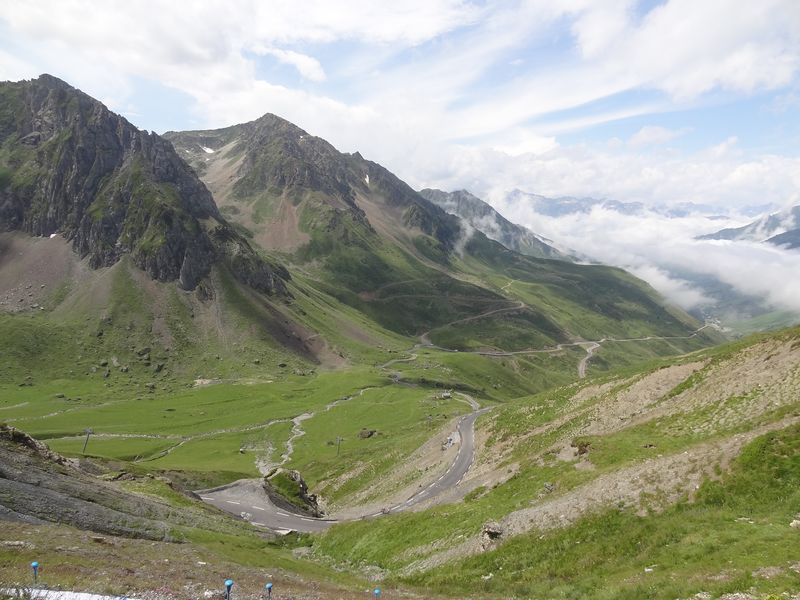 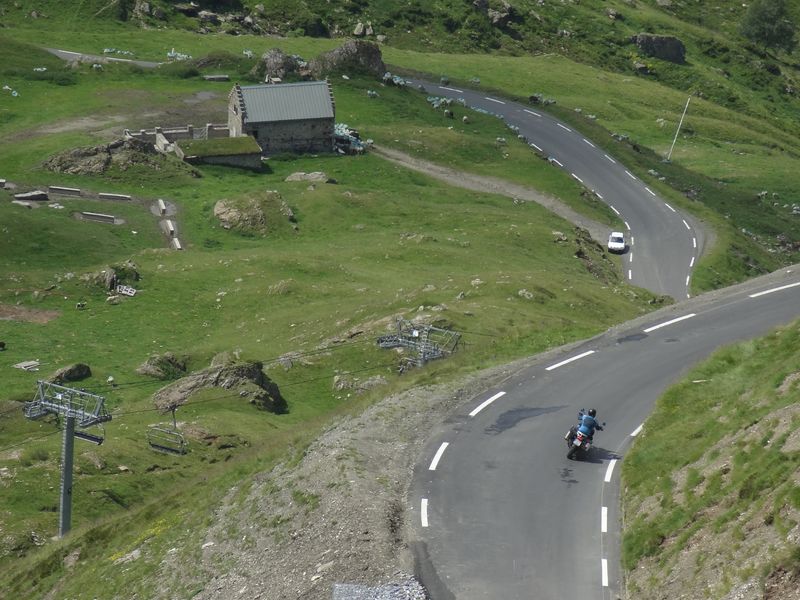 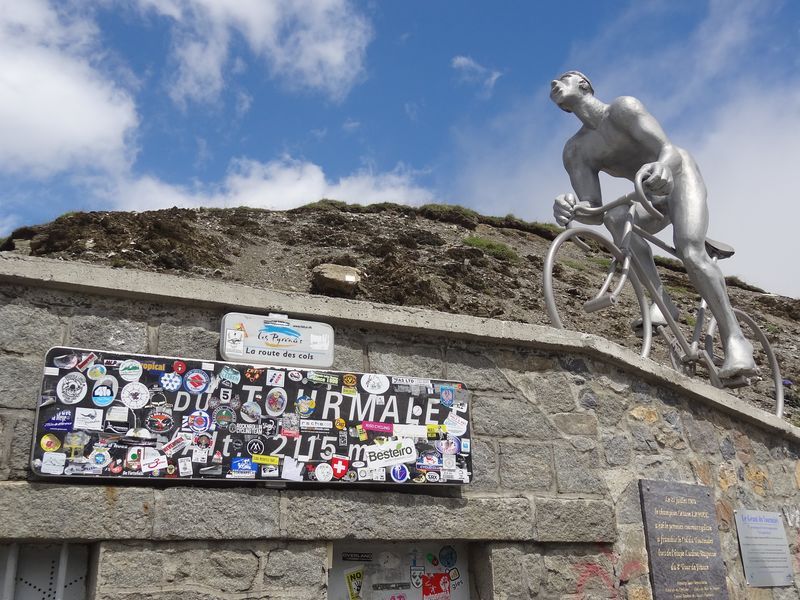 A little advice for weather, we’ll never know ; the mountain is known for its whims of weather but central Pyrenees have a bad reputation and Lourdes has not earned its nickname of” chamber pot of Pyrenees”, by chance. Then you can end up with a significant rainfall for ten days in the middle of summer or hit more usually a series of late afternoon heavy storms. You need to know how to ride between raindrops and not leave for the day in short  sleeves t-shirt and  flip-flops shoes !

After the series of 1st category and uncategorized passes, we arrive in Luchon then in the Comminges natural region, the south of the Haute-Garonne county. Up to this point you can turn around in two directions on the A64 the Pyrenean highway, which will bring you back to Bayonne in two hours when it took us three days to get here by small roads. Fortunately we were not stressed by schedules. In the area of Aspet . we take coffee on the square, in front of the fountain Henri-IV, on the terrace of the Café Français. A multitude of small passes leave on all sides. By the one of Larrieu we arrive in Arbas , the town where two new Slovenian bears were released last summer. By the pass of Portet d’Aspet we find the legend of the Tour de France and its martyrs. On the side of the road a memorial recalls the deadly fall of the Italian cycling champion Fabio Casartelli in 1995.

By the Mente pass , we ride up to the ski resort of Mourtis whose last switchbacks are wide of more than ten meters , a delight for those who like to take generous trajectories with their bikes. You can then take the option to continue to the east at the foot of the mountain range through St Girons and Foix. This is the lower elevation portion, the other climbs to Spain and Andorra, the paradise for bargains for motorcyclists. If gas is already by far cheaper in Spain (expect to earn 15 cents per liter), its more in Andorra and the motorcycle equipment shops will make you save at least the VAT on your helmets, jackets ... But for that you have to take to this Pyrenean Eldorado, with its traffic jams on the last kilometers and the sad show of this boom town covering the Andorran peeled mountains.

To reach Font Romeu, we took the first option. And here is St Lizier, just before St Girons, a medieval city, the perfect postcard landscape of Haut-Couserans region, and then the long curves of 0117 to rhe city of Foix. A busy city overlooked by the castle of Gaston Phoebus. We can then push to Axat and the valley of the Aude river discovering a village main square and its great calling terraces of local cafés in Quillan and decide to park the motorbike for a while and enjoy the sun. Between the Aude and eastern Pyrenees, the region is dotted with Cathar castles and remains. Then in Axat we turn off to reach the Capcir plateau, a paradise of Pyrenean cross-country skiing with Lake Bouillouses.

We chose the road 0118, a true mountain road with little traffic, with its narrow pavement, and bumpy asphalt where potholes are filled up with large shovel of gravel by the road maintenance services. Twisting around at the beginning in the impressive gorges of St Georges, we follow the tumultuous river course of the Aude which is shrinking as you go back upstream.

Finally, we arrive on the Capcir, a wide flat pastures where small villages are gathered around their bell tower and high bunches of spruces. In the distance, it is Mount Canigou. We sleep in Mont Louis, the fortified city by Vauban, dining on an improvised grill on a slate taken from the citadel.

Mediterranean scents, It is the descent then, with a stop at Villefranche de Conflent, another listed village. 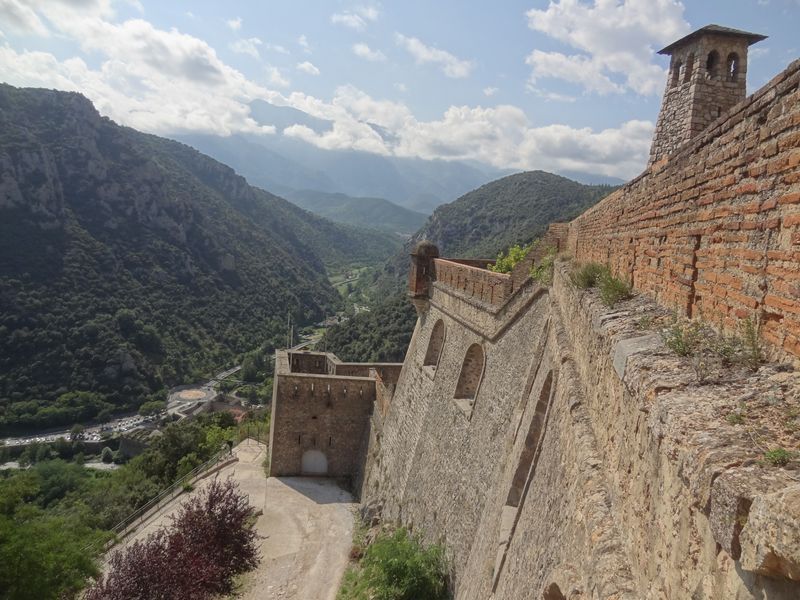 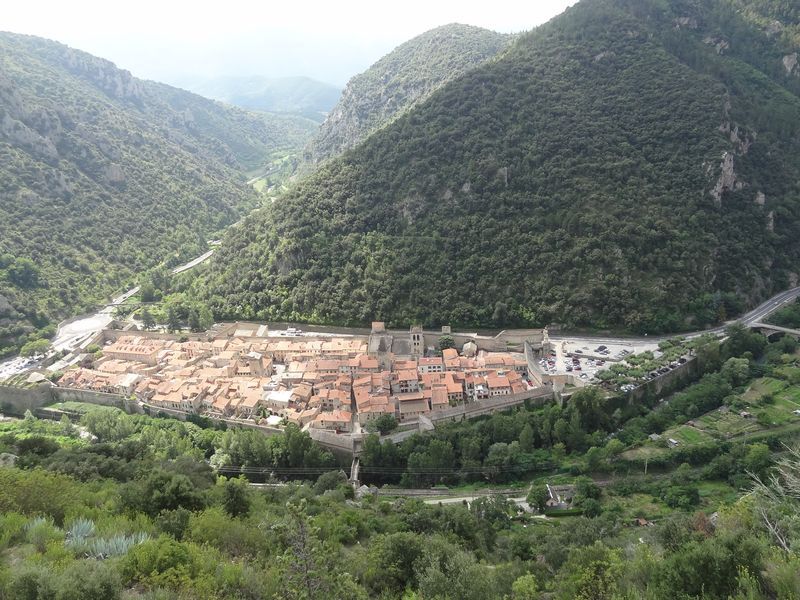 Then, after crossing the apricot and peach fields of the plain of Thuir, we stop at Castelnou. Still one of the most beautiful villages in France, one who did not steal his label. Trays of snails Catalan way, climbing cobblestone streets where you lose your breath, no more engine noises, scents of Mediterranean vegetation. Are we still in the Pyrenees?. Not really, no, it's true, you have to get elevation again and tear yourself away from the Mediterranean temptation. Direction of Le Perthus, one of the three main routes leading to Spain with the Basque Country highway and to a lesser extent, in the middle of the mountain range , the highly discussed  Somport tunnel. Just before entering the village, one forks through a small road barely marked, the Ouillat pass.

Here we are in the Albères massif, last stronghold of the Pyrenees before they dive into the sea. The grass is yellow, pine trees have replaced the species previously encountered. The Mediterranean marks with its climate this scenery like no other. Once at the very top of the pass, we finally see on the left the sea and on the right Spain (Barcelona is distant from just one hour), the border being bounded by a barbed fence so that cows and sheep are well guarded. A few kilometers down, it is Collioure, end of our crossing. I open the top case box of the bike to load anchovy jars, the local specialty, and I find my Espelette peppers bought a few days earlier. That's it, the loop ride is not closed yet but we’ve finished the crossing.

If you want to live this experience of this Pyrénées motorcycle tour you can choose between our guided tour or self-guided tour.